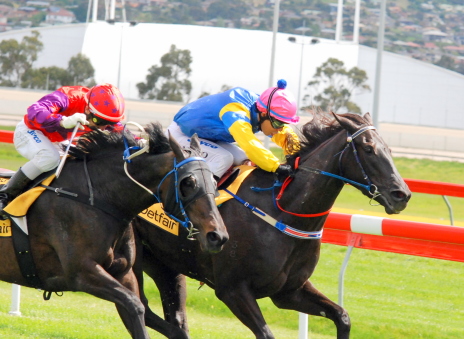 FORMER handy juvenile Oxy Angel showed a lot of promise over longer distances so her trainer Terry Evans set about preparing her for distance races this preparation and beyond. At Tattersall’s Park in Hobart on Sunday connections were rewarded for their patience when Oxy Angel stormed home to score a narrow but emphatic win in the TCM Building Services Maiden/Class 1 Plate over 2100 metres. Underrated jockey Shuji Amano had the four-year-old mare settled midfield and travelling well to the 800-metre peg. When Whoforgot Derboots began a move three-wide Amano ensured he latched onto his back to get cover heading to the home turn. Once balanced at the top of the home straight Oxy Angel powered to the lead but looked likely to be collared by the favourite Knots Sister that moved alongside 100 metres out. But under strong riding from Amano Oxy Angel dug deep and regained the lead close to home and went on to score by a nose from Knots Sister with Danestone over three lengths away third. Oxy Angel won her only other race in January when successful in a maiden-class one over 1600 metres in Launceston. Evans admitted he had intended running Oxy Angel over 1600 metres but the race was abandoned and heading =into Sunday’s assignment he wasn’t confident she would be ready for the 2100-metre trip. Listen to what trainer Terry Evans had to say about Oxy Angel’s win – click here .