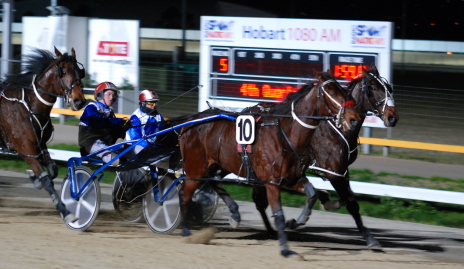 TALENTED two-year-old pacer Pachacuti caused a boilover at Tattersall’s Park last night when he outgunned the odds-on favourite Lickyalips to win the $20,000 Big Park Stud Sweepstakes final for colts and geldings over 1609 metres.

The bulk of the money was plonked on Lickyalips sending his price plummeting into $1.20, courtesy of his impressive heat win and a pole position draw.

Pachacuti, prepared by Barrie Rattray, was sent out at the luxury price of $9.10 despite his impressive second to Palmisano in their Sweepstakes heat in which the winner clocked a mile rate of 1.58.6.

Pachacuti was settled in the one-out-two-back position by driver Gareth Rattray who had a few anxious moments soon after the start when the gelding jumped out of his gear for a few strides but was quickly balanced and settled well in the run.

Lickyalips was expected to lead from the pole position and his backers weren’t disappointed and driver Ricky Duggan was able to sneak an easy first quarter.

There was no pressure on the favourite for the first half of the race and when Pachacuti was eased out three-wide to stake his claim the favourite looked to be cruising in little more than second gear.

Lickyalips’ driver Ricky Duggan let his charge slide from the 600 metre peg with Pachacuti making ground leading the three-wide train with Rykov Leis on his back.

Lickyalips kicked clear turning for home but he had no answer to Pachacuti’s powerful finish.

Pachacuti hit the line a metre clear of Lickyalips with Rykov Leis less than a metre astern.

Pachacuti is owned and raced by brothers Lyndon and Simon Dakin who have enjoyed a great relationship with the Rattray stable for many years.

Listen to what owner Lyndon Dakin had to say about Pachacuti’s impressive Sweepstakes win – click here.