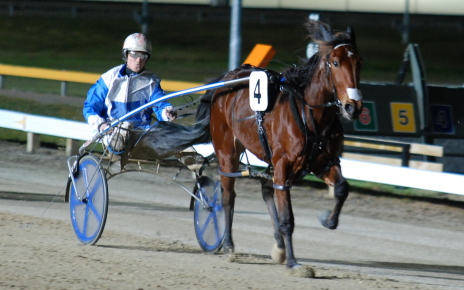 STAR two-year-old Palmisano will attempt to qualify for a trip to Melbourne next month when he steps out in a heat of the Breeders Crown series at The TOTE Racing Centre in Launceston on Sunday night.

Palmisano has won five of his six starts this season with his latest an effortless 11-metre win in the Dandy Patch (sires stakes) final over 2090 metres in Hobart last .Sunday night.

The Brian Stanley-trained youngster will line up against only a small field of four in the Breeders Crown heat and provided nothing untoward occurs during the race he should be too strong for his rivals.

Palmisano was bred by Stanley from Lucyna, a mare he raced with success and she is from a family that Stanley has been breeding from for almost 40 years.

The Breeders Crown semi-finals will be run at Tabcorp Park Melton in August 10 with the final run at the same venue on August 19.

The Barrie-Rattray-trained two-year-old filly Delightful Christian also will attempt to win her way into a Breeders Crown semi-final by winning her heat in Launceston on Sunday night.

Delightful Christian is one of only three to go around in the heat and she has drawn the pole position and should make light work of her task.