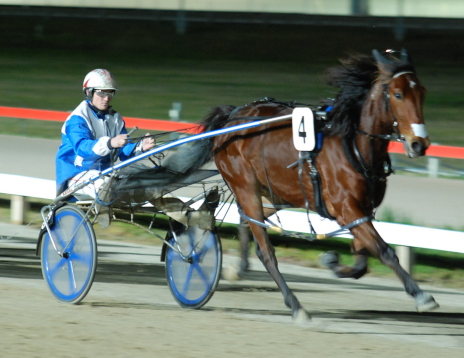 HARNESS trainer Brian Stanley declared Palmisano the best he has ever hitched up after the two-year-old gelding powered his way to an effortless win in the $30,000 Dandy Patch Stakes over 2090 metres at Tattersall’s Park in Hobart on Sunday night.

Palmisano (Todd Rattray) began well from barrier four but he had to do a bit of work early in the race to find the front.

But once settled, driver Todd Rattray allowed the gelded son of American Ideal-Lucyna to bowl along at an honest tempo and when he rounded the home turn he gave his charge a bit more rein and he slipped clear to hit the line almost 11 metres clear of Lickyalips with Riverboat Jasper the same margin away third.

It was an expected win with most punters keen to take the $1.40 offered on both pari-mutuel and fixed odds wagering.

It was Palmisano’s fifth win from only six starts with the $17,415 winner’s prize taking his season’s stake tally to almost $38,000.

Palmisano won a heat of the Big Park Stud Sweepstakes and was being touted as the likely favourite to win the final but he suffered a viral infection and missed the race, which probably denied him a clean sweep of juvenile features.

The gelding is part-owned b y the trainer who also bred Palmisano.

Listen to what trainer Brian Stanley had to say about Palmisano’s latest win – click here.