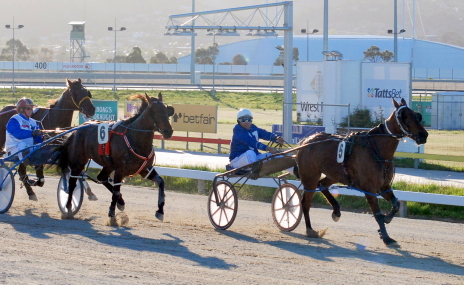 LAND OF PANAARM tuned up for next week’s Big Park Cup with an impressive win in a C6-C7 over 2090 metres at Tattersall’s Park in Hobart tonight.

The David Medhurst-trained gelding was given a gun run by novice driver Adrian Collins who eased back at the start and slotted the eight-year-old into the one-out-one-back position.

When the race favourite Gamblers Rustler took off from the rear down the back straight the last time, Collins saw him coming and eased his charge three-wide to make his charge from the 500-metre peg.

Land Of Panaarm quickly claimed the leaders and shot clear at the top of the straight.

Gamblers Rustler was unable to take up the challenge and it was left to brave mare Benediction to issue the main challenge in the home straight.

It was Land Of Panaarm’s 17th career win from 106 starts but he also has 47 minor placings that have helped his career stake earnings to just over $114,000.