Patfull ready for next step 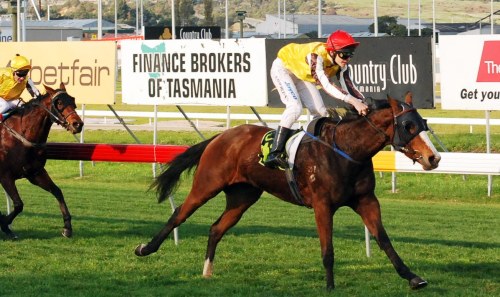 WHITEMORE trainer Graeme McCulloch has always had a decent opinion of his three-year-old filly Patfull, so it stands to reason why he expects her to figure prominently in a class one handicap over 1400 metres at Tattersall’s Park in Hobart on Sunday.

McCulloch, who is still taking in the sun on the Gold Coast as part of his and wife Christine’s annual week-long sabbatical, believes Patfull will be better suited to the 1400 metres of Sunday’s race than she was when she won over 1200m in Launceston at her most recent outing.

“I don’t think this filly is any world beater but I am confident she can win a few races,” McCulloch said.

“She won well over 1200 metres in Launceston but this is her first try in Hobart.”

“While I’m happy that she’s stepping up to the 1400 metres my only concern is that she might strike a heavy track and that won’t be in her favour.”

“At her third run this time in she ran at Devonport and jockey Stephen Maskiell got off and said she didn’t handle the heavy patches of the track that day,” he said.

The amount of rain forecast to fall on the Hobart track this week didn’t arrive. The rating on Thursday morning was a good 3 but showers on Thursday night and today could lead to a dead 4 rating if no more rain falls by race day.

According to McCulloch, Patful has trained on since her last win and will go into Sunday’s assignment in top shape.

The filly is named after AFL footballer Joel Patfull who plays with the Brisbane Lions.

“Our son Bart was signed by the Brisbane Lions last year and he struck up friendships with a few of the other rookies including Joel Patfull so we decided to name a few of our horses after those players.

McCulloch bred all three of the above mentioned horses at his Grenville Stud where he stands Patfull’s sire Partner’s Choice.