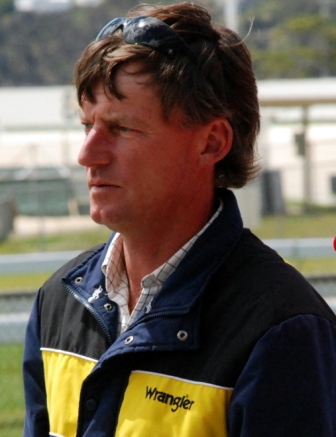 THIS time last year Longford trainer John Blacker was getting excited about the prospects of his three-year-old Stadacona developing into a handy stayer.

The gelded son of Telesto had won five of his six starts prior to being spelled and the future looked promising.

But when Blacker produced him first-up in February the spark that ignited the enthusiasm of his trainer and owners had vanished and a couple of ordinary performances left Blacker wondering if he had overestimated the gelding’s ability.

Last Thursday night in Launceston the flame was rekindled when Stadacona, with Jason Maskiell aboard, scored an impressive win in the $30,000 weight-for-age St Leger over 2100 metres.

It was arguably the most impressive win on the nine-event card.

Stadacona gave away a huge start to his rivals but courtesy of a gun ride from apprentice Maskiell the four-year-old pounced on the leaders in the home straight and won with authority.

“I never gave up on this horse because what he showed us last season was too good to just wipe him after a couple of ordinary runs this preparation,” Blacker said.

“Three starts prior he put on a crook run in Hobart but then he missed the start and rattled home and followed up with a luckless third in Hobart so his form going into the St Leger wasn’t as crook as it might have looked to some.”

“His work picked up and his demeanour around the stables changed and I was quietly confident he would win the St Leger,” he said.

Stadacona is now staring down the barrel of either a trip to Melbourne for a hit and run mission at Flemington next month or a float trip to a spelling paddock to rest up for a Hobart and Launceston Cups preparation.

“If I think the race in Melbourne is a winnable option then we’ll go there, otherwise I’ll tip him out for a decent spell and set him for the Hobart and Launceston Cups and maybe even the Devonport Cup as a lead-up to the big cups,” he said.

It was Blacker’s fifth success in the St Leger, having prepared Raami’s Magic, Dartington (twice) and Lunchtime Legend to win the only weight-for-age race run in Tasmania beyond 2000 metres.

Stadacona is owned in partnership by Arthur and Charlotte West, Baden and Susan Tuson, Blacker and the Estate of his late wife Maree.

Mr and Mrs West also were involved with Raami’s Magic and they have been long time stable clients while Mr and Mrs Tuson also raced the smart filly Zest Amour that Blacker prepared to take out Tasmania’s three-year-old of the Year award in the 2006-07 season.

In her three-year-old season Zest Amour won five in succession that included the Listed Tasmanian Guineas and the Thousand Guineas before she finished second to Victorian filly Wavelength in the Strutt Stakes.