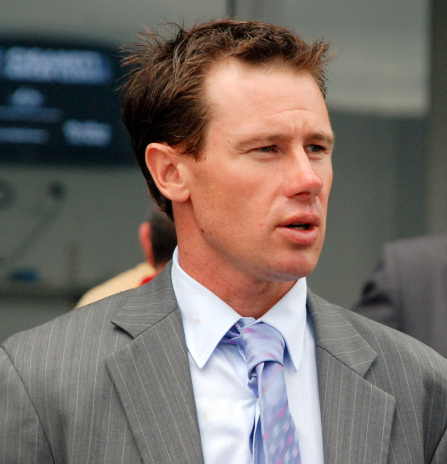 So it comes as no surprise that the former star jockey-come-trainer is back in the state for another attempt at winning the state’s two most prestigious staying events.

Fieldmaster kicks off his major cups campaign in today’s $100,000 Devonport Cup over 1880 metres on the synthetic surface at Spreyton Parkand Payne is upbeat about the six-year-old’s chances.

“This (Devonport Cup) is an ideal race to start his campaign and because he has a very good first-up record I rate him a good chance in the race,” Payne said.

“Obviously The Cleaner has the form on the board and will probably be the one to beat but I’m more than happy with my horse’s condition going into the race and the synthetic track shouldn’t present a problem,” Payne said.

Fieldmaster spent a month in Tasmania last season and won the $50,000 Jockey Club Cup at Elwick at his first outing in the state before finishing on the heels of the placegetters in the Hobart Cup and went on to run third to Prevailing and Geegees Blackflash in the Launceston Cup.

“I was happy with the horse’s effort last season in Tasmania and he went on to run a great race in the Adelaide Cup and that is more than likely the path we’ll take again,” he said.

Fieldmaster has the benefit of four trials leading up to today’s race and Payne was impressed with the gelding’s latest hit-out.

“His last trial was good because we made him go the line to win the trial and that suggested he was ready to tackle a race like this first-up.”

“The horse has really developed in that he has become a lot stronger. When he came back into work he was quite big in condition and needed the four trials,” he said.

Fieldmaster and stablemate Cellarmaster were flown to Tasmania last Thursday.

“Fieldmaster travelled really well to Tasmania but that’s not surprising because he is a horse that seems to like travelling.”

“He has settled in well at Adam Trinder’s stables and my sister Michelle (Payne) is looking after things in Tassie.”

This year’s Devonport Cup should be run at an honest pace with The Cleaner’s Vo Rogue-like racing pattern sure to give the field something to chase.

When we add to the mix bold front-runners in Makes Cents, Jay Bees Gee Gee and Zellarcy it would appear likely Dream Flyer’s race record from last year of 1m.59.10s will fall by the wayside as that was the first Cup run on the synthetic surface.

The Cleaner is drawn barrier seven while Makes Cents and Zellarcy have drawn gates six and five respectively which would suggest there will be plenty of action in the run to the first turn.

Fieldmaster has drawn barrier two but Payne says his instructions to rider Stephen Arnold will be to allow the gelding to roll into his stride which should leave him just beyond midfield after the first 400 metres.

“My horse doesn’t have exceptional early speed so we will have no option but to go back and ride him for luck,” he said.

“But in saying that I will be hoping he is getting into the race from the 800-metre peg and if he’s in touch with them turning for home he will be a genuine winning chance,” the trainer said.

Payne has his handy sprinter Cellarmaster engaged in the open sprint (race nine) and he too is first-up from a spell but given the gelding’s form when last in work he should be very competitive.