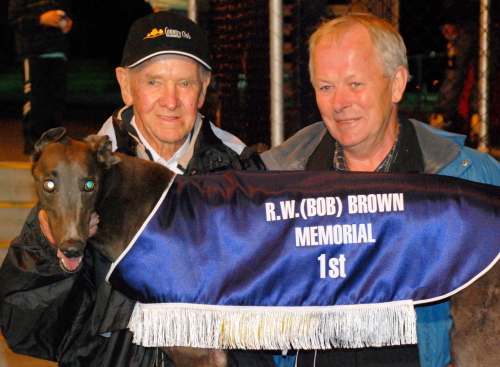 THE late Bob Brown would have been tickled pink if he’d been around to see his old mate Robert Grubb win the Hobart Thousand Consolation at Tattersall’s Park recently.

Pedro Pronto missed out on making the Hobart Thousand final but when the dog gave his rivals a galloping lesson in the R. W. (Bob) Brown Memorial, a race named in Brown’s honour, the trophy presentation ceremony made for teary and heartfelt theatre.

Bob Brown’s son Ross made the presentation to Grubb and it was clear that the result meant a great deal to both parties.

Bob Brown was considered one of the doyens of greyhound racing in Tasmania.

He was considered arguably the best muscle man in Australia in his prime with local trainers queuing up outside his Glenorchy home just to get the master to run his hands over their dogs.

Grubb is a master trainer who has managed to produce to class dogs on a regular basis for over five decades and Pedro Pronto and others from the litter should continue to keep Grubb in the winner’s circle.