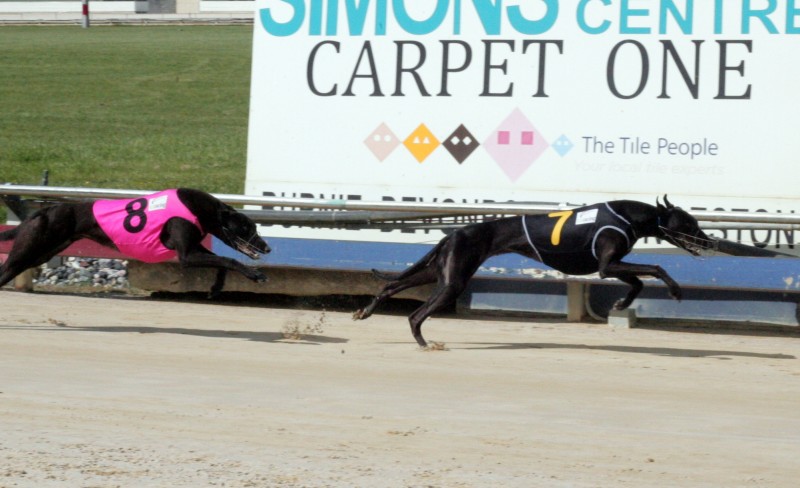 TERRY and Betty Penny had a lot of success on the racetrack with  two of greyhound bitches they bred Miss Roman Nose and Clyde’s Angel and one of them could also be a standout broodbitch.

Miss Roman Nose produced two bitches from her first litter by Lochinvar Marlow and at Devonport last Tuesday week they each won a heat of the NWGRC Tasbred Maiden series.

Dashing Roman won her heat on debut, leading all the way to score comfortably and her litter sister Loch Roman, that was having her second start, also led throughout to win her heat.

Loch Roman clocked a handy 25.84 over the 452 metres while Dashing Roman stopped the clock at 25.91 in what also was an impressive effort.

The bitches are trained by Paul Hili who has established himself as one of the state’s top trainers since he arrived from Victoria a couple of years ago.

“I couldn’t be happier with these two bitches and Paul is doing a marvellous job with them,” Terry Penny said.

“To do what they did in atrocious weather conditions with heavy rain and strong winds throughout the meeting is a credit to them.”

“Their times were good and they have both shown to be fierce competitors,” he said.

“We were thinking about Bombastic Shiraz but we ended up opting for one of his sons at stud (Spring Gun) and Miss Roman Nose is about a week away from delivering that litter which we hope will comprise seven or eight pups,” he said.

“This will probably be Miss Roman Nose’s last litter but we have the opportunity to on-breed with these two daughters (Dashing Roman and Loch Roman),” he said.