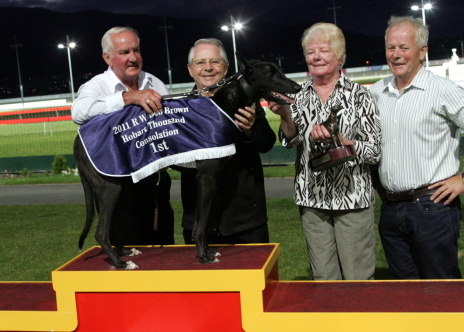 ROWELLA trainer Terry Penny celebrated a feature race double at Tattersall’s Park in Hobart last Thursday night but he would have traded both for success in the Group 1 Aceland Hobart Thousand.

Penny had the litter sister Clyde’s Angel in the Group 1 Hobart Thousand final but she was never out of trouble and was never a winning chance.

Penny’s Angel was brave in wining the Bob Brown.

He showed blistering early speed to lead from box two and held sway by two lengths at the top turn.

But :Lucky Norris was hot on his hammer and looked set to join the leader as they straightened for the run to the line.

But that’s when Penny’s Angel turned up the heat and extended his lead, leaving Lucky Norris to do little but stay in touch over the final 80 metres.

“At one stage I thought the dog on his outside was going to give him some bother but my dog stuck to his guns and fought it off and he really delivered over the last bi t of the race,” Penny said.

“This dog use to tire a lot in the last bit of his races but he’s getting stronger and more mature in the way he goes about racing these days.”

“He’s finding the line strong and that’s great to see,” he said.

Miss Roman Nose started from box eight and it was an ideal draw for the bitch that was having her second run back in the state after a moderate interstate campaign in the care of Victorian trainer Kel Greenough.

Miss Roman Nose began well and stayed wide to the top turn while Centennial Bark flew the lids from box four and led comfortably to the home turn.

Centennial Bark, prepared by Graeme Moate, looked set to score but he started to feel the pinch about 50 metres out and Miss Roman Nose kept coming and hit the line a length clear of Centennial Bark with Mojito a close-up third.

“I thought this was one of the bitch’s best wins because Centennial Bark is very hard to run down when he’s on the bunny,” Penny said.

“This bitch doesn’t pull any punches and tonight she was relentless.”

“I thought she came up a lot better than last week and she raced accordingly,” he said.

Miss Roman Nose performed admirably during her interstate trip and stripped a lot fitter for having missed a place in a Hobart Thousand heat a week earlier.

The bitch chased hard in the home straight and delivered almost a replica performance that won her the Tasmanian Oaks.

Penny said he was unsure whether he will send Miss Roman Nose and Clyde’s Angel back to Victoria.

“I was asked recently whether the two bitches were going back to Victoria and whether I would be considering sending their little brother (Penny’s Angel) as well.”

“I’ll have a good think about it because the dogs did well while they were away last time,” he said.