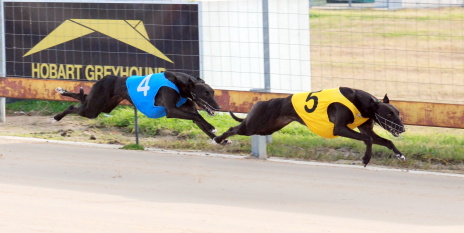 TERRY Penny celebrated his best result in 15 years as a greyhound trainer at Tattersall’s Park in Hobart on Tuesday when his talented bitches Miss Roman Nose and Clyde’s Angel quinellaed the Rapidvite Tasmanian Country Oaks.

Miss Roman Nose scampered over the 461 metres in a sizzling 25.94 seconds to score by almost two lengths from her litter sister Clyde’s Angel.

They were sent out almost equal favourites with late money arriving to give Miss Roman Nose ($2.50) the edge over Clyde’s Angel ($2.70).

Miss Roman Nose wore the yellow vest whileClyde’s Angel started next door in box four and they began in unison with Miss Roman Nose crossing to the rail nearing the top turn.

Clyde’s Angel tried hard in the straight but her kennel mate refused to wilt.

It made little difference to Penny as he owns and bred both bitches.

“This is clearly my best result since I started training 15 years ago,” Penny said.

“I’m blessed to have bred this litter and to quinella a feature race is testament to the dogs’ ability.”

“The whole litter (six pups) has done well and good luck to the other trainers (Doug Hammersley (2) and Maurie Strickland) who have the other three pups,” he said.

The litter is by Collide from Ricky’s Angel that was bred by Ricky Ponting.

Hammersley prepares Strapper’s Angel and Strapper’s Boy that have won races each as well as numerous minor placings.

Penny and his wife Betty are relative newcomers to the industry with Terry’s foray into greyhound training beginning inNew South Wales about 12 years ago.

“Betty and I have an interest in all three codes of racing and we started out owning a galloper but that became a bit too expensive so we ended up with a couple of greyhounds when we were living in NSW in the Cessnock area,” he said.

“When we retired from work and looked at where we wanted to spend the rest of our lives we came to Tasmania about eight years ago and we haven’t looked back.”

“Up until this litter came along Minted was the best I have trained and he has won six and placed 11 times from over 40 starts and he’s still going,” Penny said.

“I overheard a conversation that the bitch (Ricky’s Angel) was in season and I then approached the owners of the bitch and they agreed to let me breed with her.”

“It was my wife Betty’s idea to send her to Collide and the rest is history,” he said.

The Pennys’ reside on a 20-acre property at Rowella in the state’s north where they boast a modern kennel complex with multiple training tracks.

“We looked around quite a bit when we were looking for a property in Tasmania and this one at Rowella was perfect for what we wanted,” he said.

“I’ve put in a couple of short straight tracks and the property offers an ideal environment for walking the dogs,” he said.

Penney, 67, has every intention of expanding his breeding operation.

“We will continue breeding greyhounds and hopefully these two young ones (Miss Roman Nose and Clyde’s Angel) can become top brood bitches.”

“Greg Fahey (prominent Tasmanian greyhound buff) once told me that if I got a good litter it would take 20 years off my life, well this litter hasn’t done that but it certainly has put a spring in my step,” Penny said.