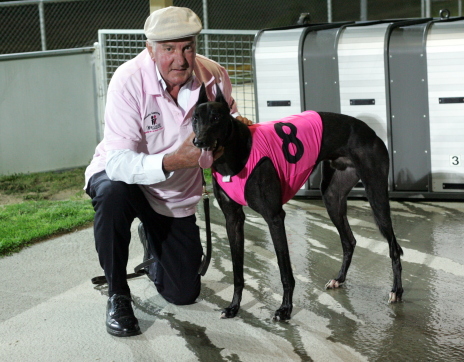 SMART sprinter Penny’s Angel played her role in the plan to raise $60,000 for the McGrath Foundation when she gave her rivals a galloping lesson in the Helen Aitchison Invitation over 461 metres in Hobart last night.

Penny’s Angel was up against a quality field that included rewind that was recently voted Tasmania’s 2011 Greyhound of the Year.

It was a keenly contested affair with the reserve Hellyeah Stella, that started from box four, the early leader with pressure from Lika Whisper (6) and Rewind (1) that was pushing up along the rails nearing the top turn and with Penny’s Angel close-up but the widest runner.

When the leaders bunched near the home turn, Penny’s Angel swooped on the lead and kicked clear and had a big enough break to hold out Rewind and Hellyeah Stella in the run to the line.

It was Penny’s Angel’s seventh win on the track from 13 outings and her 13th career win with the winner’s cheque taking her career stakes tally to almost $30.000.

The win also added another $500 to the total being raised by Greyhound Racing Victoria and Tasracing for the McGrath Foundation as part of the Go The Pink Dog promotion whicvh has so far raised $43,500 and it hopes to reach its target of $65,000 by the end of the month.