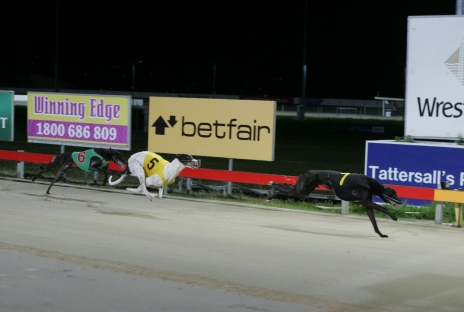 Penny’s Angel a litter brother to Clyde’s Angel, who completed a terrific double for the litter winning at Sandown, began well from seven setting splits of 5.09 and 11.05.

While the rest of the field were jockeying for positions he set up a winning break around the corner.

Where’s Magpie emerged from the pack to cut the winning margin to 2 lengths on the line with Centennial Bark filling the trifecta, a further 2 lengths away, just ahead of veteran Whispering Blaze.

Champion Damek was bumped early tried to make a run through and got badly checked to finish unplaced.

Penny’s Angel has been a terrific money spinner for the Penny’s winning 9 and being placed 13 times from 29 starts.

His record at Hobart is also very impressive winning four and being runner up three times from just the eight starts.

He now moves onto Devonport for an Invitation this Tuesday and Penny is hoping he will stay sound for a crack at the Hobart Thousand next month.