Phantom catches Lang on off night 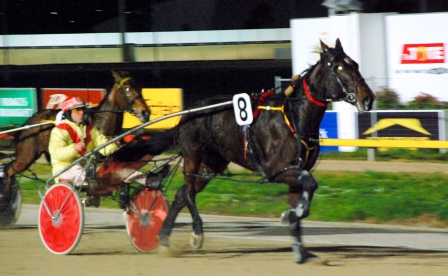 THE number of times world class driver Gavin Lang is beaten on an odds-on favourite in any one season could probably be counted on one hand but in Hobart on Sunday night the master reinsman was caught out twice on the one program.

Lang partnered Finn Lee the $1.20 favourite in the Wendy Kennedy Prelude (division 1) over 1609 metres in which he led and looked to have the race al parcelled up until the Justin Campbell-trained and driven Phantom Jasper arrived with a rush over the concluding stages.

Lang also partnered the $1.20 favourite Thirsty Mach in the feature 3YO race in which he led but compounded over the final 80 metres to finish fourth.

Phantom Jasper proved he has more wins left in him this preparation the way he finished off.

“It’s taken a while to get this horse right but changing his training regime has done the trick,” Campbell said.

“His race manners are getting better all the time and this time he really found the line strong and that’s a good sign,” he said.

Campbell has long been an advocate of interval training and it is under this regime that Phantom Jasper has been able to excel.

Campbell says the seven-year-old seems to thrive on interval training and it also marries in with his preferred racing pattern.

“I mix his intervals up by giving him short, sharp heats for a few days and then stretch them out and he seems to appreciate the variation.”

“He seems to do his best when he driven in or near the lead and he can afford to do a bit of work in the run because he is fairly tough,” he said.

It was Phantom Jasper’s second win in succession, having been successful at New Norfolk on Australia Day.

The gelding has won two from eight starts this season but he also has had three minor placings, so he is definitely his way this preparation.