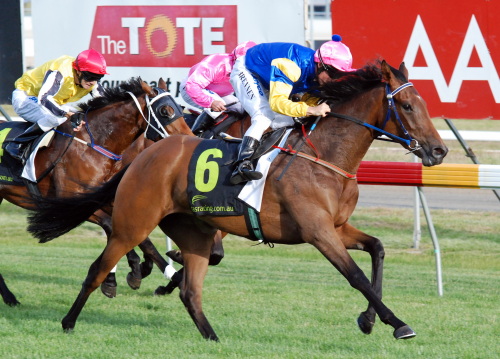 BRIGHTON trainer Terry Evans has long been regarded as a good judge of horseflesh with two recent purchases at the Melbourne Autumn Yearling Sales further proof.

In Launceston on Thursday night Evans’ two-year-old filly Pittenweem made a winning debut in the Alps & Amici 2YO Maiden Plate (1100m) to cover her purchase price in one fell swoop.

He bought Titus Flavius at the sale the previous year and he notched numerous placings last season as a two-year-old and two weeks ago he won at Devonport.

Evans paid only $5000 for Pittenweem at the yearling sale and it was on her breeding alone that convinced him to pursue her at the sale.

“I bought this filly based on the success I had with a horse called Winter Guest that won 15 for me,” Evans said.

“This filly is related to him through the dam’s side as her dam Compactus is out of Winter Guest’s half-sister:” he said.

Pittenweem (Dash For Cash-Compactus) raced greenly early and rider Eddie Brennen had to hold her together when trying to make ground from the rear from the 600-metre mark.

But when he got her to the outside in the home straight she powered home to score convincingly over Glisson and Bay Of Fire.

“She is a very quiet filly at home and very easy to handle but she did a few things wrong tonight so it was a good effort overall,” the trainer said.

Pittenweem is named after a small Scottish village located not far from the famous St Andrews links golf course.