Place Your Bet back to best 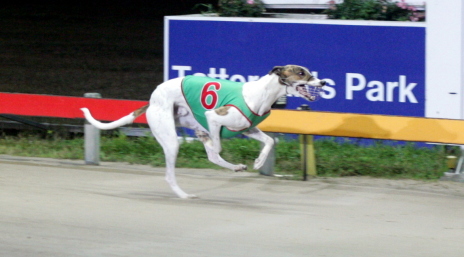 LAST year veteran trainer Ted Devine was looking forward to his latest kennel star Place Your Bet making an impact in the 2011 Group 1 Hobart Thousand but a mishap in a race blew those plans out of the water.

Place Your Bet caught the lure in a race at Devonport last September and did a lot of damage to his legs and shoulders.

It took weeks of convalescing coupled with hours of treatment and visits to his checker to ensure he returned to racing.

He tackled the Hobart Thousand heats but failed to produce.

Devine tipped him out and he returned to racing last month but didn’t show up at his first two starts.

But last Thursday night in Hobart he powered his way to an impressive victory in a strong grade three over 461 metres.

He began brilliantly from box six and quickly found the rails to lead by three at the top turn.

The Ted Medhurst-trained Collyn Tiger emerged as a real threat when he presented at the top of the home straight as did the well backed Innisfree Miss but neither could make an impact.

Place Your Bet went on to defeat Collyn Tiger by almost three lengths with Innisfree Miss 2-1/2 lengths away third.