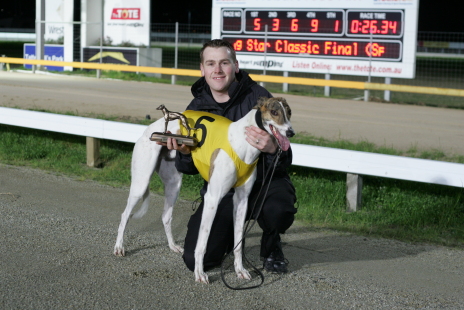 Place Your Bet’s trainer Ted Devine said last week that his pup would be better for last week’s hitout when second in the heat to Rob Pines and he was right.

Starting at the lucrative odds of $4.30 this son of Big Daddy Cool won as he liked in the end winning by 2 1/2 lengths in 26.34 from the tad unlucky Educated Cash who was checked mid race and Sheldon Cooper finished third a further length away.

Prepost favourite Sour Pop was disadvantged at the start by his kennelmate and then got checked in the run and finished last.

Jack Pines set the first two splits of 5.19 and 11.33 and should be followed with confidence over the next few starts in weaker company.

Place Your Bet’s next start will be on Tuesday in Devonport and looks unbeatable, however he will be a very short quote.

He still won the double but it was with veteran Regent Typhoon who notched up his 8th win at Hobart beating Miki Moto Mike and kennelmate Sultan’s Swing and Innisfree Miss (who deadheated for third).

Regent Typhoon has been playing second fiddle to “Cindy”, Sultan’s Swing over a number of weeks, in fact he hadn’t won at Hobart since December and so he was finally rewarded for his consistency last night.

He took up the running shortly after the first turn eventully winning by a neck from Gary Fahey’s fast finishing Miki Moto Mike who ran a terrific race and should be followed at Devonport on Tuesday jumping from his favourite box.

Harness driver Brendan Pursell broke through for his first win since becoming a greyhound trainer just over a month ago.

Pursell was delighted with the win of his charge Cash Lyrics who virtually led from box to post and in doing so recorded his first win as well.

The son of Cash Express has been a model of consisentcy since he came to Pursell’s kennels recording four seconds from his six Tasmanian starts.

Big Smoke and Me Not You filled the placings while Nick Howard’s Mister Stalwart finished fourth but may be one to follow.