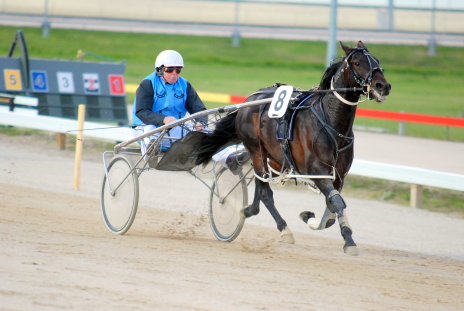 PINT sized pacer Mister Boswell has been promising to win a race and in Hobart last Sunday night the Rodney Ashwood-trained and driven four-year-old finally delivered.

It was an impressive performance from the gelded son of Western Terror but not surprising given he has notched eight minor placings from his last 25 starts.

But winning is what the game is all about and the gelding’s owner Corey Hazelwood finally got the reward for persevering with the mighty midget.

Mister Boswell is arguably the smallest harness horse racing in Tasmania standing at just under 13 hands and he probably wouldn’t look too out of place in a herd of Shetlands.

Nevertheless he is all standardbred and possesses a constitution befitting a grand circuit performer.

On Sunday night Mister Boswell ($3.60) settled just worse than midfield and travelled well to the 600-metre peg where Ashwood managed to get off the fence and ease him three-wide to make his charge.

So quickly did he let down the gelding quickly hauled in the leaders and dashed clear at the top of the straight and went on to score by almost 15 metres from Zaza Bromac with Pure Wish over two metres away third.

Ashwood was full of praise for Mister Boswell and while he lacks in the size department he certainly makes up for it with courage and desire.

Listen to what trainer Rodney Ashwood had to say about Mister Boswell – click here.