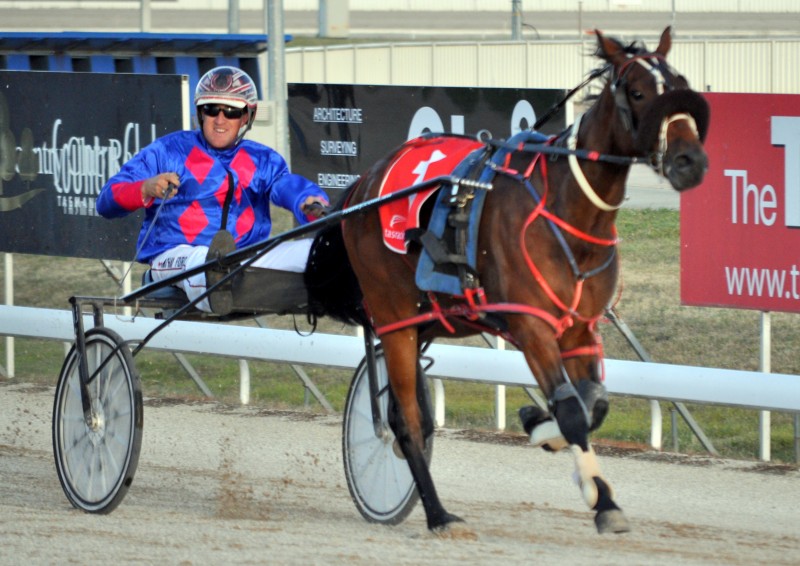 TASMANIAN harness racing trainer Steve Lukac admitted to being surprised after his well bred two-year-old Pockets of Courage won the first two-year-old race of the season in Launceston on Sunday night.

He was not surprised that the gelding won but taken aback at the odds offered about the son of Courage Under Fire winning the $10,000 Keith Stanley Debutante Stakes over 1680 metres.

Pockets of Courage paid $11.80 on the Tote and much the same was offered by the fixed odds corporate bookies.

“He finished first and second in the two trials and I was very confident he would run well,” Lukac said.

“His biggest asset is that he is a beautifully gaited horse with good manners.”

“There’s a lot of upside to this horse,” he said.

Lukac admitted the win also had a lot to do with a very good drive from Nathan Ford.

Pockets of Courage (Courage Under Fire-Rangiann) was well away from the mobile but despite having the pole position he couldn’t match the speed of Goggo Gee Gee that landed in front with the favourite Sultan Fella facing the breeze.

Ford was content to settle his charge behind the leader where he stayed until the home turn.

When Ford called on Pockets of Courage for the supreme effort in the home straight the gelding responded magnificently and went on to score by two metres from rank outsider Origin Cronk with another outsider Chica Bella flashing home late to grab third 4.2 metres astern.