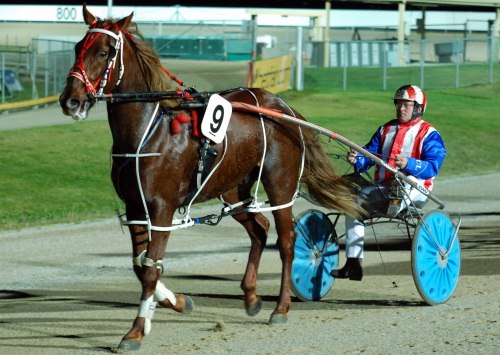 VETERAN harness racing owner-breeder Derek Burdon has had his share of success over the years and it looks like he has another promising youngster coming through the ranks in the form of two-year-old Ponderosas Gamble.

The well bred gelding, that was having only his third start, came from last 600 metres out to score a game win after engaging in duel all the way up the home straight with promising colt Island Affair.

The Paul Williams-trained juvenile settled last but always looked to be travelling sweetly and when Williams released the reins 550m out the gelding unleashed a scintillating turn of foot that had him alongside the leader nearing the home turn.

Island Affair gave plenty when challenged and looked set to hold a margin but when Williams called on his charge for the supreme effort he gained the upper hand close to home and hit the line a neck clear.

Williams said Ponderosas Gamble had a bright future because he was performing well without knowing what he was doing.

Burdon purchased the gelding at last year’s Tasmanian Yearling Sale where he was offered by his breeders Fred and Pauline Barker.

Listen to what trainer-driver Paul Williams had to say about Ponderosas Gamlble – click here.