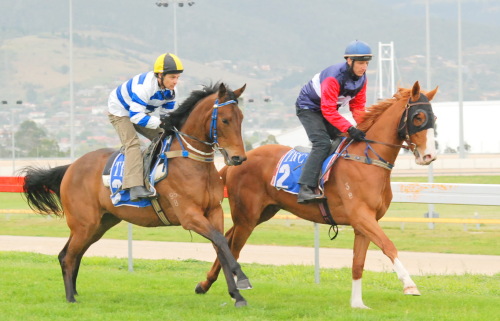 THE first two-year-old trial in Hobart today boasted only four starters but they all showed potential.

The trial was won by Another Concerto, a leggy filly by Snippetson from Miss Schumann making her a half-sister to I Am Magic that was placed in a Listed 2YO race last season.

Another Concerto was ridden by Stephen Maskiell who allowed her to bowl along in front and she wasn’t pushed to score by almost a length from Foils and Campeon with Ready To Pounce finishing only a neck astern.

The four juveniles rounded the home turn in pairs and they ended up four abreast over the final 250 metres of the 900-metre trial.

Another Concerto is trained by Charlie Goggin and owned by a syndicate headed by Prime Thoroughbreds director Joe O’Neill who hand-picked the filly from the paddock at Yarraman Park Stud in Scone (NSW).

Goggin was upbeat about the filly and confirmed she was likely to race in the fist two-year-old race of the season in a fortnight.

The colt has furnished into a nice type and his trainer Jason Clifford expects him to race as an early two-year-old.

Foils was not presented at the sales. She is raced by her breeder John Lucock who bred her from his former handy race mare Honor Belle that could have risen to great heights had she not suffered a leg injury that curtailed her racing career.

Ready To Pounce (Hold That Tiger-Rancherie) is a yearling sale graduate. She was bred by Kingclift Thoroughbred Stud at New Norfolk and sold to Dale Butters for a modest $7000.

The first two-year-old race of the season will be run over 900 metres at Tattersall’s Park in Hobart on October 24.

Listen to what trainer Charlie Goggin had to say about Another Concerto’s trial – click here .