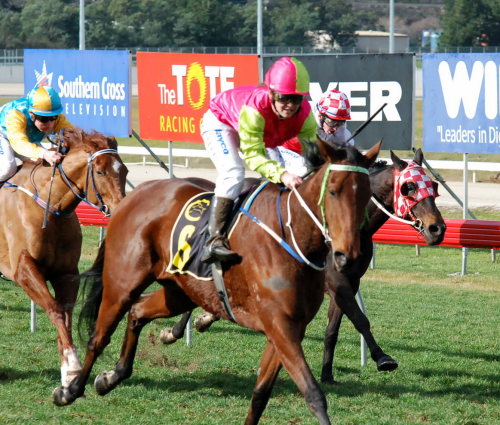 PRINCESS Sophie earned a trip to Victoria to compete in the big smoke this weekend after she powered her way to an impressive win in 0-75 handicap over 2100 metres at The TOTE Racing Centre in Launceston last Sunday.

The Vern Poke-trained mare relished the heavy track, coming from last near the home turn to score full of running over race leader Rock This Party with Happent a close-up third.

Poke paid only $500 for the mare, making her one of the bargain buys of the year as she has amassed $25,000 in stakes since joining Poke’s stable.

“This mare has done a great job and I’m sure there are more wins in her,” Poke said.

“She will go to Melbourne this week and run in an 1800-metre race at Flemington on Saturday,” he said.

Princess Sophie, a six-year-old mare by Promontory Gold from Quick Streaker, was ridden by underrated apprentice Crystal Hallett who has guide the mare to all of her three wins in Tasmania and Poke confirmed she will ride the mare at Flemington.

“This mare goes well for Crystal so why break up a good partnership,” Poke said.

There was another aspect of Princess Sophie’s win. Listen to what trainer Vern Poke revealed after the race – click here .