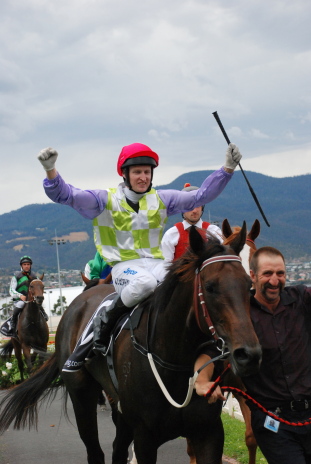 Lady Lynette went into the race as the undisputed Queen of Tasmanian racing while Rebel Bride was carrying the princess tag with six wins from only eight starts to het credit of which five of those victories were notched this season.

Lady Lynette was first-up from a spell but looked magnificent and was backed to start the $2.30 favourite while Rebel Bride was sent out the $3.70 second elect.

It was an evenly run race with Off And Laughing setting a solid pace with Avionics facing the breeze while Craig Newitt had Rebel Bride travelling sweetly on the leaders back and Lady Lynette (Michael Guthrie) on her outside.

Guthrie was the first to make a move and when he eased Lady Lynette three-wde to challenge at the top of the straight she loomed as the likely winner.

Newitt persevered with the rails and when he called on the Leon Wells-trained four-year-old for the supreme effort she dug deep and cruised to the front and went on to score by almost three lengths from Lady Lynette with Avionics a game third.

Newitt was thrilled with the mare’s effort.

“It doesn’t matter where you take this mare she’ll be competitive. She has such a great will to win and who knows how far she can go,” Newitt said.

Listen to what trainer Leon Wells had to say about Rebel Bride – click here .