Proven Octane fires on all cylinders 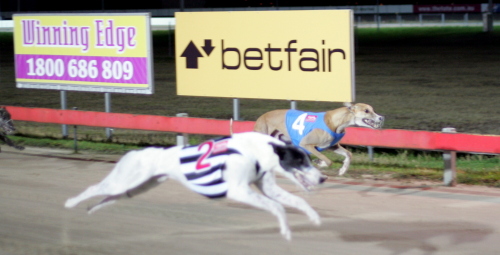 Proven Octane won his opening round heat last Thursday week over the 599-metre trip and last night he delivered the goods over the shorter trip (461m).

The Bruce Drake-trained dog has only started seven times and his only wins have been in this series.

But Drake said the dog had been a slow maturer and had only just started to come to terms with what racing is all about.

He clocked 35 seconds to win his 599-metre heat after finding trouble early and at his latest outing he was again only fairly away but mustered speed quickly to finds the front before the top turn.

He sped clear and despite drifting up the track over the concluding stages he still had over a length to spare over Sheer Octane with Oskarama a close-up third.

Hellyeah Benny clinched his berth in the final with an impressive heat win over 461 metres.

He began well from the inside box but was cut out nearing the top turn.

But he used great track sense to ease off heels at the top of the straight to put in his claim.

The son of Where’s Pedro sped clear and hit the line with lengths to spare over Posh Gem and outsider Inferno Master.