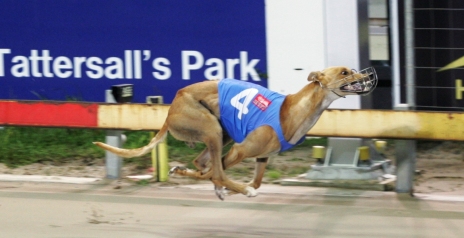 WHILE his monica might be a tongue twister there is no doubt Pudzianowski is a name we will be hearing plenty of in the coming months.

The Russell Watts-trained pup had the pundits buzzing in Hobart last Thursday night where he scored an impressive win at his first try in the state.

He dashed over the 461 metres in a slick 26.09s, which is well above average for an inexperienced chaser having his first start on a track.

Pudzianowski (Pure Octane-Petal) arrived in Russel Watts’ kennel about a month ago with a shameful debut effort to his credit.

The dog debuted at Sandown in February when in the care of top Victorian trainer Darren McDonald.

But during the race the dog was knocked from pillar to post and as a result was stood down for 28 days for failing to chase.

“He came to me about a month ago and he’s been as good as gold every time he’s gone to the track,” Watts said.

“He passed his stewards’ trial no problem and tonight he has just blitzed them,”

“It takes  handy dog to run this sort of time at his first look at the track (26.09s) so naturally we are expecting him to win his share of races, provided we can keep him going straight,” he said.

The dog backed up in a juvenile in Launceston on Monday night but after missing the start slightly he had to settle for second to outsider Pippi’s Gold.

That was Pudzianowski’s last chance to win a juvenile in Launceston as he was whelped in March 2009.

“We’ll head to Devonport next Tuesday for a grade five over 452 metres but I am really looking forward to stepping him up to the middle distances because I believe that will be his forte,” Watts said.