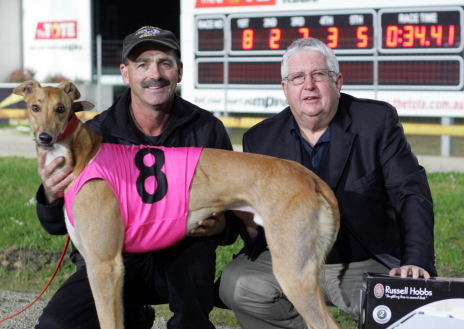 PUDZIANOWSKI confirmed his status as one of Tasmania’s most promising greyhounds when he powered his way to an effortless win in the Greg Fahey Middle Distance Championship at Tattersall’s Park in Hobart tonight (Thursday).

The Russell Watts-trained dog showed his customary early speed from box eight to share the lead after rounding the first turn and by the time he hit the top turn he has four lengths clear and had the race safely in his keeping.

It was the dog’s second try over the 599-metre trip with his only other effort a track record-breaking win in his heat.

Pudzianowski hit the line 6-1/4 lengths clear of Piccolo Boy that showed a lot of courage to keep finding in the straight with the other heat winner Classy Kenny a close-up third.

Watts said the state heat of the National Sprint Championship was the dog’s next main mission.

The heats and final of that series are to be held in Launceston in early August.

Pudzianowski is owned by Greg Swann and was originally prepared by Darren McDonald in Victoria.

Watts said he expects the dog will eventually make his way back home but in the meantime he is enjoying the ride.

Outside of the winner, the effort of Piccolo Boy was good enough to suggest he will make his presence felt in whatever he contests in the coming months.

He was having only his fourth start for Brighton trainer Susan Gittus since arriving from Western Australia early last month.