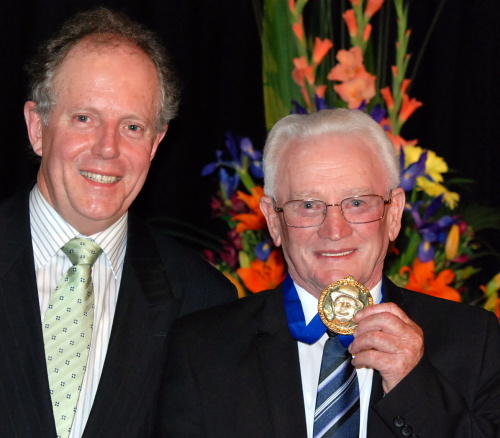 Pullen, who turns 79 in a fortnight, was rewarded for his contribution to the harness industry as a gifted reinsman and talented trainer who also is regarded by his peers as the consummate horseman.

During an emotional presentation ceremony at Country Club Tasmania, Pullen delivered a heart-warming acceptance speech littered with anecdotes from past experiences and how he views harness racing today.

Twice Tasmania’s leading reinsman – 1971 (dead heat with Terry Peck) and 1978
Regular driver of the great Golden Alley winning approximately 40 races.
Drove him to win the 1967 Tasmanian Pacing Championship off 60 meters – the longest handicap winner in the history of the race.
Drove him to win the 1969 A G Hunter Cup at the Melbourne Showgrounds – the last Tasmanian driver to win a major feature race on the mainland.
Prolific winner of feature races in Tasmania including the Tasmanian Pacing Championship, Tasmanian Derby and Tasmanian Oaks.
Pullen retains his trainers a licence and in recent years prepared numerous winners including Daman in the 2005 Devonport Cup.

He also stables some of the stars of Australasian harness racing when they race in Tasmania including all-time champion Blacks A Fake and last year’s Group 1 Tasmania Cup winner Bettors Strike.