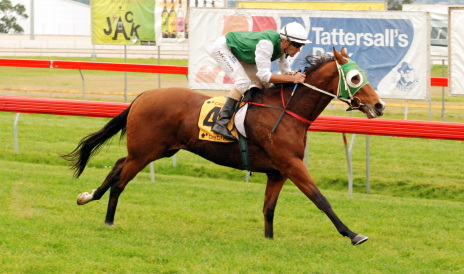 Punctuate made it five wins from six starts when he gave his rivals a galloping lesson in the $20,000 Tattersall’s Park 3YO Plate over 1100 metres.

The effort was good enough to warrant a trip to Victorian at the end of the month to tackle 1000-metre sprint at Caulfield.

It was his fifth win from only six starts and trainer David Brunton expects the Invincible Spirit gelding to be very competitive in whatever he contests this time in.

Punctuate is owned by a syndicate of 10 that includes Brett Harris who was ecstatic after the gelding’s latest triumph.

“We are so thrilled with this horse because he has won five from six now and probably should be unbeaten,” Harris said.

“Most of the syndicate members had already booked the flights toMelbournein anticipation of this win,” he said.

Punctuate was purchased by Brett Williams at the South Australian Magic Millions Yearling sale in 2009 for a modest $7000.

His only unplaced run was in the 3YO Cup won by Magnetosphere in which he finished fifth after being dispatched to the rear of the field as a result of suffering severe interference at the start.