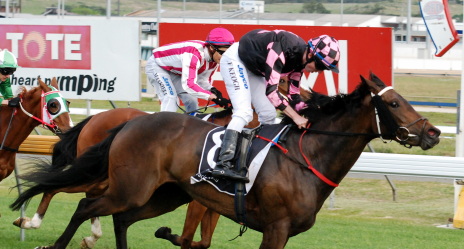 THOROUGHBRED racing at The TOTE Racing Centre moves to its new timeslot tonight (Wednesday) with nine races programmed on what looks a very even card of racing.

Punters will have their ability tested in the first, a maiden-class one over 1620 metres with a number of winning chances on exposed form.

Danestone has been runner-up at his only two visits to the races but trainer Brendan McShane is confident tonight’s journey of 1620m will be the key ingredient that will allow the gelded son of Dansili to break his maiden status.

The three-year-old was brave when second on debut in Hobart and two weeks ago he hit the front in the straight only to be run down by What A Life over the concluding stages.

The David and Scott Brunton-trained Ground Control has been placed at two of his four starts this preparation but a good barrier (3) could be just what he needs to break through.

Xaartee was a good winner at this track three starts back and after a fourth in Hobart on the inside grass track she followed up with a game second to Tree Bandit over 1600m.

What A Life could no have been more impressive in winning second-up over 1400m in a strong maiden at this venue two weeks ago and according to her trainer Gary White she hasn’t gone backwards.

Other genuine chances in the race are Nine Under, Never All Over, Perky Pair and Our Lieveling.

This writer’s best bets on the card could be Head Spinner in race two and Feyfey’s Uncle Max in race four.

Head Spinner, prepared by Leanne Gaffney, was second at this venue two weeks ago behind Hussinger but looked to have the others well covered and only needs to get clear racing room in the home straight to be very hard to beat.

Feyfey’s Uncle Max has only had the one start in Tasmania since arriving from Queensland early this year.

According to trainer Stephen Lockhart the five-year-old had a few issues but he has managed to sort them out and he expects the gelded son of Choisir to be very hard to beat at his second attempt in his adopted state.

He opened his Tassie account with a second to Hold Onto Your Hat in Hobart on Melbourne Cup day in a maiden over 1100m in which he missed the start by three lengths but went down by less than a length.