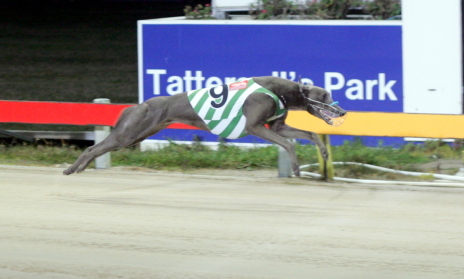 A PUP from Victoria gave a glimpse of big things to come when Wandy Neg produced a sensational effort to win at his first start in the state at Tattersall’s Park last Thursday night.

Wandy Neg was having his first start for the Mick Stringer kennel and started as a reserve (9) from box three.

The son of El Galo began only fairly but mustered speed to tag the leader Kenzo Warrior to the top turn.

The striking blue dog moved alongside the leader turning for home and forged to the lead.

He went on to defeat Splash A Tah by 9-1/2 lengths with Proven Lotus a close-up third.

Wandy Neg arrived in Stringer’s kennel with wins at Sandown in Maiden and Grade five company to his credit, in fact all of his outings in Victoria were at Sandown or The Meadows but for his last start in his home state which was a fourth at Geelong in a mixed grades four-five over 520m.

Wandy Neg covered the 461 metres in a slick 26.02s which was one of the best of the night.