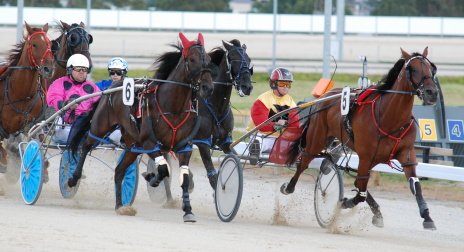 CONSISTENT pacer Put Mback continued on his winning way at Tattersall’s Park in Hobart on Sunday night with a game all-the-way win over archrival Clyde Maguire in the Speedy Ben Pace final over 1609 metres.

With state’s leading driver Gareth Rattray in the sulky, Put Mback showed good gate speed to comfortably hold the lead to the first bend while Clyde Maguire was forced to work hard from his wide gate (6) to settle at the leader’s wheel.

It was the Michael Laugher-trained gelding’s third win in succession but his second win from only two outings this preparation.

Put Mback was sidelined for about 10 months courtesy of a broken pedal bone in his off-side hind leg suffered while spelling in March last year.

Laugher says the gelding has fully recovered and has returned much stronger this campaign and he was particularly pleased with the way his horse refused to wilt when challenged so far from home on Sunday night.

Rattray also was pleased with how Put Mback has handled the pressure this time in.

The gelded son of Peace Of Art-Brewers Gold was bred by the trainer and his wife Toni who also owns the gelding.

Listen to what reinsman Gareth Rattray had to say about Put Mback’s latest win – click here.