Quastor back and on track for Derby tilt 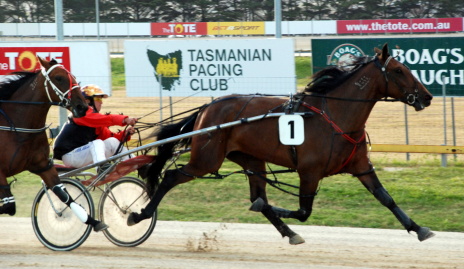 LAST season’s best two-year-old Quastor Centurion looks to be back on track after an injury forced him off the scene for almost six months.

The gelding returned to the winner’s circle in Launceston with an impressive win, scoring by 10 metres from Put Mback and Woody Beours, clocking a mile rate of 2m.01 and ran home his last half (800m) in a slick 58.4s.

Quastor Centurion suffered an injury during the running of the Breeders Crown semi-final in Victoria in August.

The Kent Rattray-trained three-year-old was placed first-up and the trainer was quick to secure blood analysis but when those results showed no problems he pushed on with the campaign.

In Launceston last Sunday night any doubts about the horse getting back to top form were dispelled when he powered his way to an effortless victory in the Mitavite Pace over 2200m.

“I probably worked him a bit light leading up to his first run back and he blew very hard after the race,” Rattray said.

“I had his bloods done and there wasn’t much wrong with it so there was no cause for concern.”

“I took him to the trials the next Monday and I was very happy with the way he performed. He ran a good last half mile (800m) so I knew he wasn’t far off and he showed that with this run,” Rattray said.

Quastor Centurion is on a path to the Tasmanian derby on February 27 in Hobart but Rattray is unsure of where he will place his stable star in the lead-up to that race.