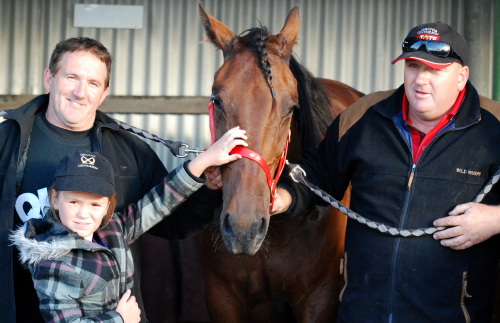 LAST season’s top two-year-old Quastor Centurion sounded a warning to all interstate invaders intending to line up in next Sunday night’s Tasmanian Derby when he delivered an arguably career-best performance to win the Schweppes 3YO Pace over 2090 metres at Tattersall’s Park in Hobart last night.

With his regular driver Erin Hollaway aboard, Quastor Centurion gave a handy field of three-year-olds a pacing lesson as he strolled to a 13-metre win over Turnpike Cruiser with Woody Beours the same margin away third and just in advance of the race favourite Thats So Irish.

Turnpike Cruiser is a Victorian invader being prepared at Westbury by Michael Laugher while Thats So Irish is trained in Victoria by Jack Kendall and driven by his wife Karen who was born and lived in Devonport.

Quastor Centurion settled back in the field and with a hot pace set by Reason To Dream but the leader was given no peace and eventually handed up to That’s So Irish that galloped for 200 metres before charging forward to assume control with a lap remaining.

Quastor Centurion’s trainer Kent Rattray was delighted with the win and agreed it was an awesome display at the business end of the race.

“I’m very happy with that,” Rattray said after the race

“He was very much underdone at his first run back from the spell but I got him to the trials before his next start and he won that in Launceston in similar fashion to this win.”

“He will be up against some very nice horses in the Derby next Sunday night but after this win I’m more than happy that my horse will go into the race in great shape,” Rattray said.