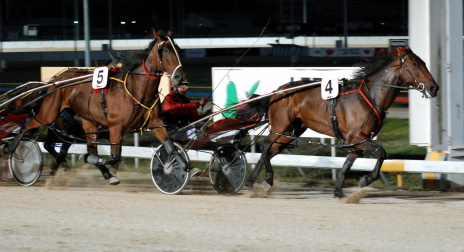 It was Quastor Centurion’s first win this season and first triumph since he scored in Launceston back in June last year.

The Kent Rattray-trained four-year-old went into last Sunday night’s race with fair form to his credit having been placed at Devonport two starts prior and he was subsequently placed fourth to Klebnikova Leis in Launceston on March 18.

Quastor Centurion was Tasmanian two-year-old of the year, winning his first eight starts that included the Premier’s Plate, Youthful Stakes, Golden Slipper and heat and final of the Dandy Patch (sires stakes).

He then ventured to Melbourne where he suffered interference in a heat of the Breeders Crown series that resulted in him being sidelined for about five months.

He won five times last season that included a courageous effort to take out the St Leger against older horses but that was his last win until last Sunday night’s triumph.

Rattray was pleased with Quastor Centurion’s latest win and he is hoping it spars a new lease on life in the gelded son of Time Stands Still.

Listen to what trainer Kent Rattray had to say about Quastor Centurion’s latest win – click here.