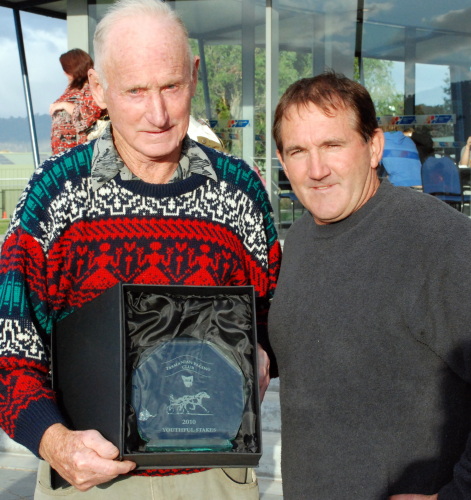 SMART two-year-old pacer Quastor Centurion kept his unbeaten record intact when he scored an impressive win in the $12,000 BetaSport Youthful Stakes over 1609 metres at Tattersall’s Park in Hobart tonight (Sunday).

The Kent Rattray-trained gelding showed plenty of early speed to lead and without spending any more energy than required he stacked them up and burst clear in the home straight to record an effortless win.

It was his third win from as many starts but clearly his most emphatic.

Quastor Centurion was driven by Erin Hollaway who has been aboard the Time Stands Still-Denneice Bay gelding in all of his starts.

“Erin is a very talented driver and I never have any qualms about putting her on my horses,” Rattray said.

Quastor Centurion was not put through the Tasmanian yearling sale owing to a chipped bone in his off front foreleg.

However the breeder John Jetson opted to offer him privately and sold him for an undisclosed sum to Greg Pearton who manages the GM Pearton Family Trust syndicate that races the gelding.

Well bred filly Imperial Majesty faced the breeze from the outset and did abgea5 job to hold down second with Daisy Adele a close-up third after trailing the leader and eventual winner throughout.

Listen to what trainer Kent Rattray had to say about Quastor Centurion’s latest win – click here .