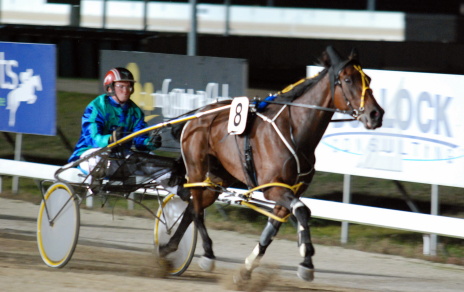 TALENTED harness racing mare Queen Of Fire has been installed equal favourite to win the Sunrise Bakery Easter Cup to be run over 2698 metres in Launceston on Sunday night.

If she is successful on Sunday night she will be the first mare since Concorde Lombo (1999) to win the Launceston Pacing Club’s premier event.

Queen Of Fire will start off a 10-metre handicap and three-out on the line, while Our Sir Jeckyl will step off the equal back mark of 20 metres with the Dean Braun-trained Our Chain Of Command.

Queen Of Fire could not have been more impressive in winning her Easter Cup heat and that followed an impressive win in the Devonport Cup.

She proved her worth when she finished second to Make Mine Cullen in the George Johnson mares’ feature in Hobart in late December.

She began her career in Victoria as a three-year-old, proving her worth with multiple wins and she was second to Elixer in the Australian Oaks and at four she was runner-up to Make Mine Cullen in the 4YO Breeders Crown final.

However, her form waned and had not won a race for more than a year when she arrived in Slater’s stables at Brighton.

She has emerged triumphant four times in Tasmania and Slater is hoping her fifth is on Sunday.

He also has Camivell Rock in the Easter Cup final and he too will have his share of admirers after he was a fast-finishing third to Waiona in the other Easter Cup heat last week.

“I have a leaning towards Queen Of Fire because she is in career best form and her times were great last week but I have a lot of respect for Camivell Rick and if he gets the better run in the race he could win without surprising me,” Slater said.

The Easter Cup is race seven on the 10-event card and it is scheduled to start at 8.09pm (AEST).