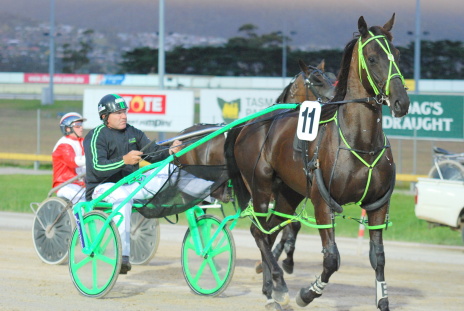 Former Queensland pacer Fletch Davis will be aimed at the country cups over summer after his impressive win at Devonport. Having his fifth start since coming from Queensland the four-year-old sprinted away from his opposition to win by four metres over Boutique Art and Bumble Don in the Dignas Cuisine Pace (1930m). Originally raced by prominent harness racing identity Kevin Seymour, the gelding was bought by Devonport builder Brett Collins two months ago and transferred to Latrobe trainer Brett Jaffray.

Collins explained that Fletch Davis was among a group of pacers Seymour gave to young trainer-drivers in Queensland to help boost their careers. The gelding was in the care of Bart Cockburn who had some success with him at Albion Park before deciding to advertise him for sale.

“I noticed him in the Horse Trader and went ahead and bought him for a four-figure sum,” he said.

Collins was looking for a horse to race after losing two pacers that he had been involved in. He and some other mates raced had Modern Judge and Ickys Judge in a syndicate but both have gone amiss.

“Modern Judge did a suspensory ligament and Ickys Judge has been diagnosed with heart defibrillation,” he said.

With the other members of the syndicate not keen to get into another horse Collins went ahead and bought Fletch Davis on his own “He has gone 1.55 in Queensland and we’re confident he will be well suited to the country cups over Christmas and New Year,” he said.

Fletch Davis is likely to have one more run before heading for a spell. Claiming driver Ben Parker, who assists Jaffray in the preparation of his horses, was in the sulky last night. From limited opportunities the young driver has now won three races. He and Jaffray play football together at Wesley Vale.