Racing career over for star mare 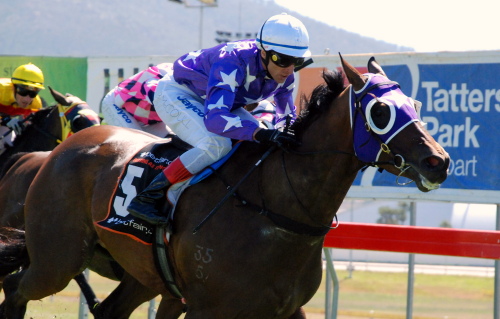 STAR Tasmanian mare Moulin Rouge’s racing career is over as a result of a leg injury suffered within days of her returning to the track.

Moulin Rouge was expected to resume racing this month and on the eve of a trial at Longford recently she was diagnosed with a hole in her near-side front tendon that was severe enough to prevent her from racing again.

Her Spreyton-based trainer Barry Campbell was devastated and understandably so given he expected the upcoming season to be her best.

“What can I say except it is very disappointing and horses like her just can’t be replaced,” Campbell said.

“She was in great shape and ready to trial with the expectation of taking her to Melbourne but when I checked on her legs the day before she was to trial the nearside front leg had a bubble and a subsequent scan revealed a hole in her tendon.”

“The mare is still well in herself and you wouldn’t know there was anything wrong with the leg.”

“There was a chance that with another eight months off and some treatment she may have been able to race again but the owners decided her future was as a broodmare,” he said.

Moulin Rouge was owned by the head of Star Thoroughbreds Denise Martin along with Tasmanians Richard and Miranda Foster and John and Judy Kingston.

Martin, who purchased the mare at the 2007 William Inglis Yearling Sale for $30,000, said sending her to the paddock for eight months and bringing her back as a six-year-old was not a viable option.

“When I bought this filly it was for the sole intention of having a filly to race in Tasmania with friends.” Ms Martin said.

“She turned out to be very good and Barry (Campbell) was confident from day one that she would be very good, and as usual he was right.”

“The best option was to sell her as a broodmare and hopefully find the right buyer and we have been very fortunate in that regard,” she said.

Moulin Rouge (Commands-Dance Class) has been sold to Rheingold Pastoral for an undisclosed sum and Martin confirmed last night the mare will be sent to 2008 Golden Slipper winner Sebring that stands at Widden Stud in NSW for a fee of $49,500.

Moulin Rouge had only 16 starts for eight wins and five minor placings for almost $135,000 in stakes.

She won six in Hobart, including a quality handicap (Winzenberg Trophy) and two on her home track at Spreyton Park.

At her final race track appearance last season she was second to I’m A Hussy in the $100,000 weight-for-age fillies and mares’ Vamos Stakes in Launceston. She also was placed second in the $100,000 Bow Mistress at Elwick on Derby Day behind Victorian mare Dollops.

Martin said the success of Moulin Rouge has encouraged her to continue to buy suitably-priced fillies to race in Tasmania.