Radio stalwarts acknowledged for their efforts 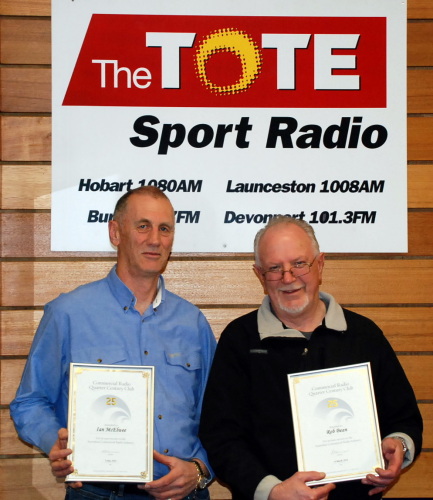 TASMANIA’S racing industry relies heavily on TOTE Sport Radio to deliver coverage of its entire racing product statewide and two of its long-serving employees were acknowledged for their service to the station and the industry this week.

On-air presented Ian McElwee and station producer and on-air announcer Bob Bean celebrated 25 years in radio this month, which is a feat that should not go unrecognised.

Bean began his foray into radio at 7BU in Burnie and after a sting in Launceston he returned to Burnie before finally making his way to Hobart to take up a position with 7HT that now is TOTE Sport radio.

McElwee began his career in radio in Launceston but his ventures took him interstate for a stint with 3UZ that is now Sport927.

McElwee also made his way back to Tasmania and he has been delivering race day approximates and dividends as well as co-ordinating magazine programs on TOTE Sport radio for over 15 years.

Listen to what McElwee and Bean had to say about their time in radio and their involvement with racing – click here .