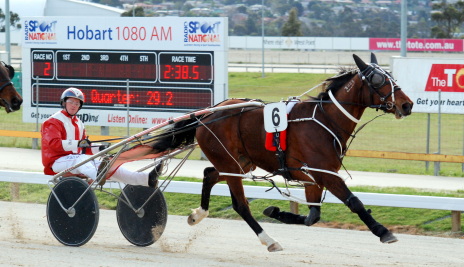 THE connections of talented four-year-old pacer Jaruzelski Leis have been careful not to overtax the son of Bettors delight with the hope of him one day making the grade at the elite level.

Jaruzelski Leis is a powerfully built individual that has made only eight appearances at the races for six wins with his latest triumph in Hobart on Sunday night one of his best.

The Barrie Rattray-trained gelding was eased out of the early action from his wide front-row gate (6) but when the pace slackened noticeably soon after, driver Gareth Rattray sent him around the field and pushed on to take up the running.

“This horse has done a good job considering he had an issue with over racing and pulling in his races,” trainer Barrie Rattray said.

The trainer’s son Gareth said the horse has a nice future and will be aimed at the Raider Stakes (4YO sires stakes feature) next year.

“He is nowhere near fully wound up because he is still learning what it’s all about,” Gareth Rattray said.

“Dad has always thought he would mature into a very good horse so we’ve given him time to grow into himself.”

“He never raced at two because he was just too big and not mature enough to cope with racing.”

“We had to back off him even though he was winning because he started to pull hard and when he kicked the sulky foot rest one night he got a fright and we had to tip him out and start again,” he said.

Jaruzelski Leis (Bettors Delight-Kazakova Leis) is owned and raced by his breeders Trevor and Marjorie Leis.