Ramaru ends campaign in a high 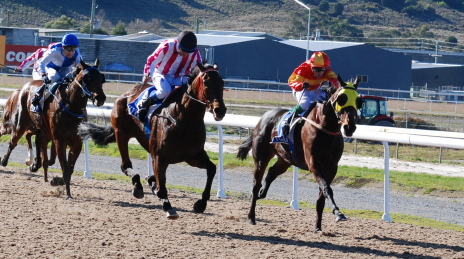 IT was a case of mission accomplished for lightly raced four-year-old Ramaru when he finally broke his maiden status in a combined maiden-class one over 1880 metres at Spreyton Park today (Sunday).

The Brendan McShane-trained gelding had been placed three times leading up to this race and deserved to break through.

Ramaru (Ratki-Oamaru Dancer) was allowed to settle back in the field which was out of character for the Irish-bred gelding that had been ridden on the pace at most of his more recent starts.

Apprentice Bulent Muchu allowed the gelding more rein 500m out and he set sail after the leaders.

Ben hit the front at the top of the home straight but he had no answer to Ramaru’s powerful finish.

Ramaru went on to score by 2-1/4 lengths from Ben with Fibbing a length away third and the winner’s stablemate also produced an aye-catching effort to finish fourth.

Listen to what trainer Brendan McShane had to say about Ramaru’s win .