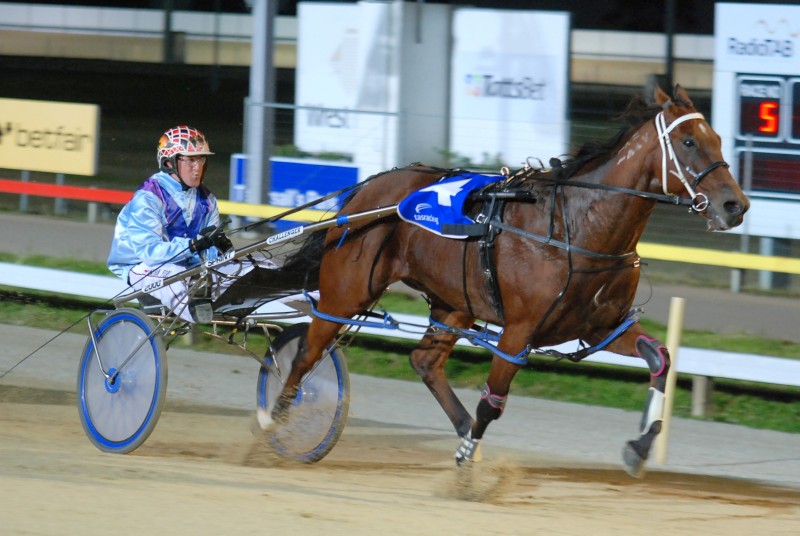 Quality open class pacer Ransom Olds delivered one of his best performances this season to win the Plunkett Family Ascot Gold Cup over 2579 metres at Tattersall’s Park in Hobart on Sunday night.

Ransom Olds ($6.70) began brilliantly from the standing start to lead and once settled he was rated superbly by talented driver Nathan Ford.

Last week’s Golden Mile winner Greysteel stepped well from his 20-metre handicap and driver Ricky Duggan opted to circumnavigate the field to eventually race outside of the leader and this gave back marker Our Sir Jeckyl the coveted one-one sit.

The favourite Beautide ($2.70) landed in the one-out-two-back position and was always travelling comfortably but when Nobeer Nocheer moved up three-wide to stake his claim he put the favourite in a zip-fastener pocket.

Ford waited until the home turn to release the brakes and when he did Ransom Olds forged clear and went on to defeat Beautide by almost five metres with Quastor Centurion ($7.40) 6-3/4 metres away third and just in advance of outsider Land Of Panaarm ($78).

It was Ransom Olds’ fourth win of the season and his 13th career victory.

Listen to what ransom Olds’ trainer Tony Petersen had to say about the gelding’s latest win and what races have been targeted for the rising six-year-old – CLICK HERE.