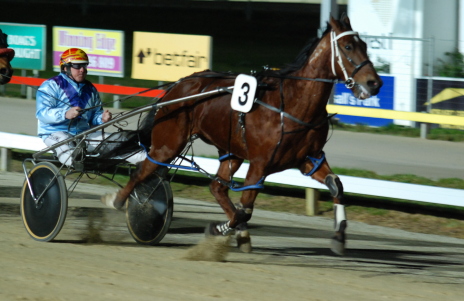 WHEN New Zealand bred pacer Ransom Olds first arrived at Tony Petersen’s stables at Mangalore about four months ago the trainer didn’t quite know what to make of the then four-year-old that clocked a rate of 1m.54 on debut as a three-year-old.

But after the just-turned five-year-old scored his fourth win in succession with a brilliant front-running display at Tattersall’s Park in Hobart tonight (Sunday) he said he is privileged to have the horse in his stable.

Ransom Olds (Paul Ashwood) stepped brilliantly from the front row of the standing start of the Father’s Day Handicap and after travelling a lap the end result was never in doubt.

Ransom Olds is part-owned by Aaron Peacock who sent the horse to Petersen on the recommendation of a mutual friend John McLean.

Petersen is confident Ransom Olds has what it takes to win his way to open class and beyond.

Listen to what trainer Tony Petersen had to say about Ransom Olds latest win – click here.