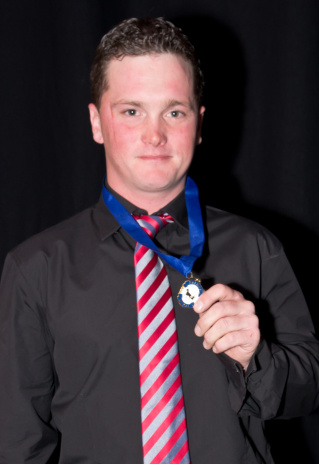 Rattray won his seventh consecutive driver’s premiership with 87 winners but taking out the Halwes Medal was the icing on the cake.

The Halwes Medal was introduced to reward the outstanding achievers of the industry and it is based on similar lines to the Vin Knight Medal in Victoria where representatives of the media and select industry administrators are allocated specific race meetings on which to provide votes on a 3-2-1 basis.

Industry stalwart Jamie Cockshutt, instigator of the Halwes Medal and the Breeders, Owners, Trainers and Reinsperson’s Association of Tasmania (BOTRA) worked tirelessly to ensure the award was introduced

“I’ve always said that Tassie needs to reward our harness participants with something special and when we came up with the name Halwes Medal we were set because it fits with rewarding high achievers,” Cockshutt said.

“Tassie is a small state but I would expect every recipient of a Halwes Medal will appreciate it at least as much as any winner of a Vin Knight Medal.”

“It has certainly created a lot of interest amongst the participants and I would expect it to become a much sought after prize for our drivers and trainers.

Rattray topped the voting with 42 points to be four clear of Ricky Duggan who led the field with eight rounds remaining.

“I am privileged to win the inaugural Halwes Medal and it is something I will cherish always,” he said.

The votes are made public after each meeting except for the last eight meetings which are kept secret so as to add to the suspense on Awards night.

“Having the last eight rounds of voting read out on the night definitely adds to the suspense,” Rattray said.

The winner of the medal also receives $1500 while the leading young achiever (under 25) in the voting also is acknowledged.

“It was great to see the young participants polling well such as Dylan Ford and Zeke Slater who each polled 14 votes to share the BOTRA Young Achiever award,” Cockshutt said.

“It is an open voting system and that was evident by the number of participants who polled votes,” Cockshutt said.

$1,500 plus Medal – sponsored by BOTRA Tasmania and Jamie Cockshutt