Rattray down and out in race fall 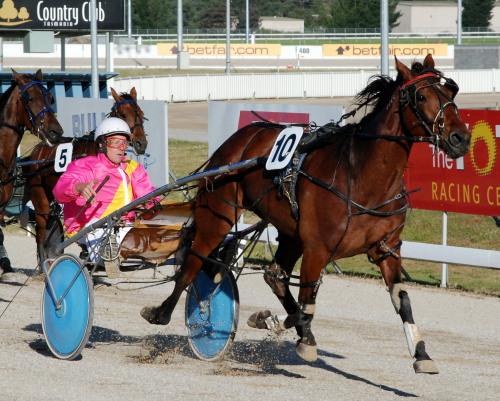 TASMANIA’S reigning premier reinsman Gareth Rattray came close to suffering serious injuries when he was catapulted out of the sulky soon after the start of a race in Launceston on Sunday night.

Rattray was aboard race favourite Buddahs Best Mare in gate three on the front line but just as the starter was about to release the field the horse jumped out of its gear.

The horse crossed his legs and crashed to the track sending Rattray flying in the air and backwards, hitting the deck hard and with the back of his head first.

Veteran driver Dallas Krushka, who was aboard Jonzaak and trailing the favourite, also was catapulted out of the cart when his horse crashed into the back of the fallen horse and he too crashed heavily to the inside of the rubber pylons.

Another casualty was Troy Madden who lost his seat from Topup but the young novice reinsman somehow managed to spring back to his feet and grab hold of the reins and kept his charge from galloping off into the night.

Krushka was taken to the Launceston General Hospital as a precautionary measure and later allowed to leave but was suffering from soft tissue damage around the shoulder region.

Rattray was allowed to go home but he too appeared shaken by the ordeal.

“I was diagnosed with mild concussion but I’ve since had a look at the incident and I’d agree I’m lucky to have got away with what I did,” Rattray said.

“The best thing to do is have a couple of days off and rest so I’m confident I will be right to drive in Hobart on Sunday night,” he said.

A stewards’ inquiry into the incident will be opened when all parties are available to give evidence.

While Rattray and Krushka were unable to see out the remainder of the meeting the race was re-run and amazingly Madden emerged triumphant aboard Topup that came with a well-timed run in the straight to win easily.

Top Paige made it a family double later in the night when the gelding led all the way to win with Troy’s father Geoff Madden in the sulky.

Both horses scored at their previous starts at Devonport.

“It’s been a long time since I’ve taken only taken two the races and they’ve both won twice in succession – four from four is pretty good,” Geoff Madden said.