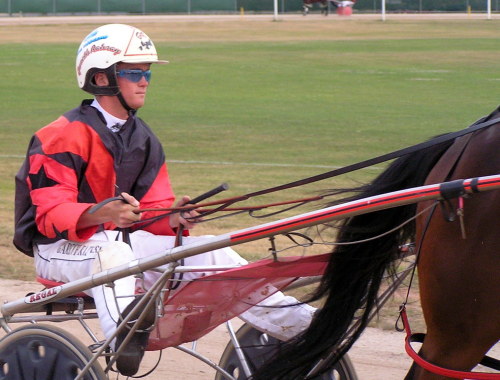 STAR Tasmanian reinsman Gareth Rattray took a commanding lead in the Australasian Young Drivers Championship series with a masterful drive to win the third heat of the series at Penrith tonight.

Rattray won the opening heat aboard a 12-1 outsider and while he finished down the track in the second heat at Penrith tonight he made amends by guiding the favourite Mysterious Quartet to victory in the third series heat.

Rattray slotted his charge into the one-out-one-back position and waited until the death knock to ease him out three-wide to challenge.

The favourite gathered in the leaders within a blink of an eye and he charged home to score easily from Regal Hawk and Lachlan Glow.

Rattray leads by 15 points heading into the next round of two heats at Harold Park tomorrow night.

The final heat will be held at Menangle on Sunday as part of the Inter Dominion final program.

Rattray already is a winner of the title, having been successful in New Zealand in 2003.