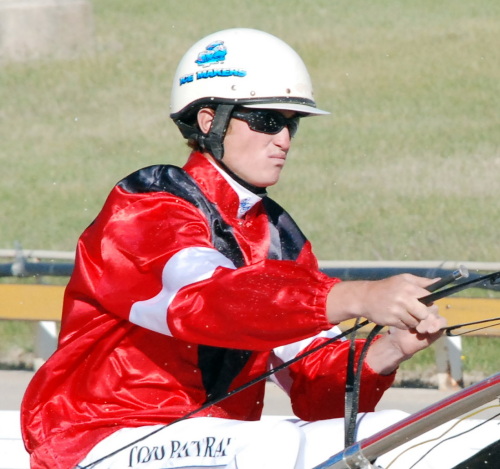 TODD RATTRAY emerged from the Bullock Consulting Youngbloods Challenge series in Launceston last Sunday night with his second title but it wasn’t smooth sailing despite going into the last round of heats with a 10-point lead.

Rattray finished fourth in the first heat on Sunday to earn seven points but his main rival Mark Yole, who was lying second with 30 points, won the heat to take maximum points (12) and close the gap to five points.

To add to the drama, Rattray was without a drive in the final heat and was automatically allocated six points in accordance with the points distribution rules of the series, while Yole was aboard race favourite Maybe Doc.

In the end it was Todd’s father Barrie Rattray who played a hand in securing his son the victory as he trains Ashkalini that proved too strong for Maybe Doc on the night.

Todd emerged the victor over Yole by thee points to bring to an end another great Youngblood series.

“Me not having a drive and getting the six points was not good in one way but good in another,” Todd Rattray said.

“I would have preferred to have been driving in the last heat because then you are in control of your own destiny but then if you draw a slow horse you might finish last and get one point and if that had have happened Mark (Yole) would have won,” he said.

Rattray notched four winners and a minor placing when he won the series in 2009 but this year he did it with three wins and a fourth.

“It was a bit more clear cut when I won it two years ago,” he said.

The series comprises 10 of the best drivers under the age of 23 with the series winner decided on a points score basis.

Rattray, 21, has been driving for three years with much success, but most would expect nothing less as he is from the Rattray dynasty that has dominated Tasmanian harness racing for the past four decades.

He is lying fifth on the driver’s premiership with 36 wins but he also has notched almost double that tally in minor placings.

“It’s been a good for me so far season and I’ve really enjoyed competing in the Youngbloods Challenge again.”

“My brother James won it twice so to have matched him is pretty good because we (brothers) are still very competitive in that way,” he said.

Todd is the youngest of four brothers who have followed in their father Barrie’s footsteps.

Twins Gareth and James (25) have excelled with Gareth the state’s reining premier driver, a title he has owned for the past five years, while James is living his dream in the USA driving for one of the top stables.

Adam Rattray, 23, drove for a while but he has opted to pursue another profession as well as helping out around the stables at Longford when time permits.

Todd has aspirations to one day train in his own right and possibly take over the reins at Karalta Pacing Stables when his father Barrie decides to throw in the towel.

“I want to train one day and hopefully it will be for the family business here at Longford,” he said.