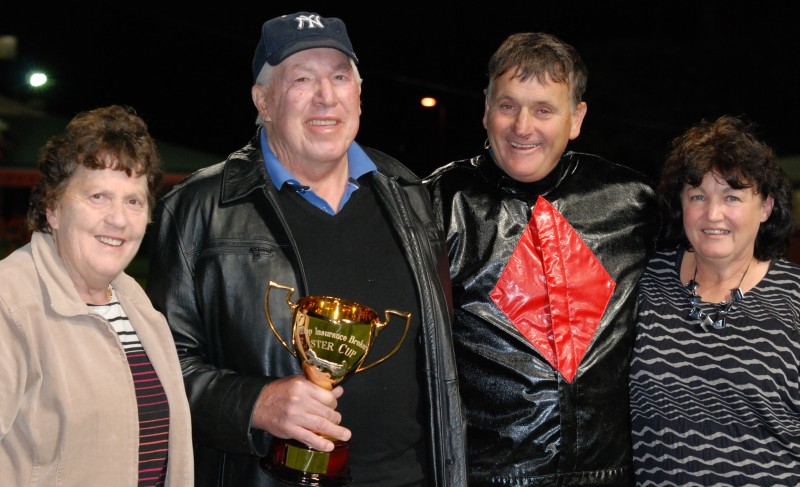 ONE of Tasmania’s most decorated trainer-drivers Barrie Rattray turned back the clock when he partnered his gallant six-year-old Biggernbettermax to an impressive victory in the 2013 McKillop Insurance Brokers Easter Cup over 2698 metres at The TOTE Racing Centre in Launceston tonight (Sunday).

Biggernbettermax began brilliantly from his 10-metre handicap to settle midfield after travelling 300 metres but when the pace slackened Rattray sent the six-year-old around the field to take up the running just over two laps from home.

Rattray waited until entering the home straight the last time to call on Biggernbettermax for the supreme effort and the gelding responded magnificently to go on and score by about six metres from Empty Envelope with outsider Nobeer Nocheer a distant third.

Biggernbettermax has turned in some sensational efforts this preparation winning the Devonport Cup last month that followed a convincing win in the NWTHA Cup at the same venue.

Biggernbettermax is owned by Rattray in partnership with Ian Dunham.

It was Rattray’s fourth Easter Cup win having been successful with Genghis Karalta twice in 1993-4 and with Mountain Glory in 2000.

Rattray said the gelding’s improved form this preparation can be attributed in a great part to the work his son James Rattray and his Swedish partner Fia Svensenn had put into the horse’s training regime.

He also hitched up the favourite Beautide (James Rattray) but he galloped away at the start and lost valuable ground. He made a midrace move to catch the field but the effort to get there took its toll and he was unable to figure in the placings.

Listen to what trainer-driver Barrie Rattray had to say about Biggernbettermax’s Easter Cup win – CLICK HERE.