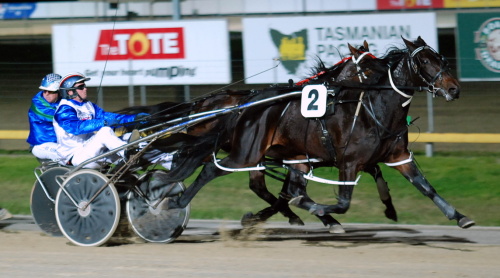 HARNESS trainer-driver Barrie Rattray has captured just about very feature race on offer in Tasmania but in Hobart on Sunday night he achieved a milestone that adds more credence to an already impressive CV.

Rattray became the first trainer to prepare the winner in each sex category of the 2YO Betfair Sweepstakes when Benediction won the fillies’ final and Beautide led all the way to win the colts and geldings version.

The sweepstakes series has been run in two divisions since 1995.

Rattray has been a dominant force in Tasmanian harness racing for almost three decades and while he takes most achievements in his stride he is particularly pleased with last Sunday night’s outcome.

“You certainly never set out to achieve this sort of result but when it happens you can’t help but feel some satisfaction,” Rattray said.

“Winning both these two-year-old classics is just a by-product of what we are about.”

“We have invested a lot of money and time in trying to improve the standard of our breeding enterprise and others have been doing the same because that’s the only way we can go forward.”

“The bottom line is we have to breed better horses and hopefully this (winning both Sweepstakes races) is an indication that we are on the right track,” he said.

Benediction is by Bettors Delight from former star mare Queen Carey that was bred by Rattray at his Karalta Pacing Stables at Longford from one of his foundation broodmares Draw Card.

The filly produced a powerful finish to come from near last to score over race leader Klebnikova Leis.

Her dam Queen Carey was an outstanding race mare winning 18 of her 52 starts and she clocked a best mile rate of 1.56.3 when she won the first race ever held on the Tattersall’s Park track at Elwick in October 2005.

“I had an opinion of Benediction from the first day laid a hand on her,” Rattray said.

“We had trouble getting Queen Carey in foal because we tried twice with Bettors Delight frozen semen for two failures but when the stallion was shuttled to NZ from the US we secured some chilled semen and that was successful,” he said

Benediction is part-owned by Lyndon and Debbie Dakin and it was Lyndon who advocated for Queen Carey to be put to Bettors Delight.

“Had it not been for Lyndon (Dakin) we wouldn’t have put the mare to Bettors delight because at the time the $8000 was out of my reach but he was adamant and we went ahead,” Rattray said.

Dakin was so excited when Benediction won the Sweepstakes final he was unable to get down to the presentation area to receive the trophy.

In the colts and geldings final Beautide led all the way to defeat Karalta Wizard that is trained by Barrie’s father Wayne.

Beautide also is by Bettors Delight from one of Rattray’s most successful broodmares Gorse Bush.

Rattray had two contenders in the male final with Hangover Joe (Elsu-Katie Jo) his other runner and preferred elect in betting ($2.30).

But Hangover Joe blotted his copybook by galloping continuously during the race while Beautide ($2.60) was faultless and dug deep to stave off a serious challenge from Karalta Wizard in the closing stages.

“Beautide and Hangover Joe are both nice horses but I must admit we believed Hangover Joe would win the race if everything played out on equal terms.”

“But when I looked up with a lap to go and saw Hangover Joe well out of it I was quietly confident we would win,” he said.